Not That Kind Of Girl

Posted on September 30, 2014 by creatornorthshoregirl

“It’s a special kind of privilege to be born into the body you wanted, to embrace the essence of your gender even as you recognize what you are up against. Even as you seek to redefine it.”

“I always say what’s in my head,” proclaims six-year-old Eloise in the movie adaptation of Kay Thompson’s iconic 1955 children’s books, which came at the precipice of monumental cultural change and envisioned a precocious proto-feminist with an ancient soul and an impressive vocabulary. Eloise’s freedom of expression was more than a storytelling trope — her bold willingness to externalize her inner life, in its full spectrum of darkness and light, was emblematic of the changes to which Thompson (1909–1998) was bearing witness and the directions in which she herself sought to ever so gently, ever so subtly shift the cultural current with her Eloise books.
(Like Tolkien famously asserted and Sendak subsequently echoed, Thompson didn’t believe that there is such a thing as writing “for children” and thus never considered her iconic series to be “children’s books.”)

It is no coincidence that Thompson’s beloved protagonist appears as one of several classic picture-book illustrations tattooed on Lena Dunham’s body.

Dunham is in many ways a modern-day Eloise of her own making, always saying what’s in her head — stuff of extraordinary insight, emotional intelligence, and unflinching vulnerability — as another generation of women and the men who seek to understand and love them leaps across another precipice. The substance of that abyss — love, work, sex, friendship, body, therapy, and all the messy in-betweenery of life — is what Dunham explores with equal parts wit, warmth, and wisdom in Not That Kind of Girl: A Young Woman Tells You What She’s “Learned” book.

In one particularly neo-Eloisian passage in the introduction, Dunham recalls buying a used copy of Helen Gurley Brown’s 1982 book Having It All and argues that despite how questionable much of Gurley Brown’s advice might be, there is something to be said — something ought to be said — for the sheer courage of saying what’s in one’s head, especially when one happens to be a woman in a culture where, despite our best intentions, the expectation is otherwise:

There is nothing gutsier to me than a person announcing that their story is one that deserves to be told, especially if that person is a woman.

As hard as we have worked and as far as we have come, there are still so many forces conspiring to tell women that our concerns are petty, our opinions aren’t needed, that we lack the gravitas necessary for our stories to matter. That personal writing by women is no more than an exercise in vanity and that we should appreciate this new world for women, sit down, and shut up.

Dunham parlays this into her own motives for writing the book:

I want to tell my stories and, more than that, I have to in order to stay sane… And if I could take what I’ve learned and make one menial job easier for you, or prevent you from having the kind of sex where you feel you must keep your sneakers on in case you want to run away during the act, then every misstep of mine was worthwhile…

No, I am not a sexpert, a psychologist, or a dietitian. I am not a mother of three or the owner of a successful hosiery franchise. But I am a girl with a keen interest in having it all, and what follows are hopeful dispatches from the frontlines of that struggle.

Dunham pens these dispatches with ebbing honesty, both inner and outward, of which few of us are capable, always delivered with a yin-yang of imperfection and idealism, both her own and our culture’s. She explores, for instance, the particularly pervasive epidemic of people-pleasing from an angle we rarely dare consider:

I’m not jealous in traditional ways — of boyfriends or babies or bank accounts — but I do covet other women’s styles of being.

I have been envious of male characteristics, if not the men themselves. I’m jealous of the ease with which they seem to inhabit their professional pursuits: the lack of apologizing, of bending over backward to make sure the people around them are comfortable with what they’re trying to do. The fact that they are so often free of the people-pleasing instincts I have considered to be a curse of my female existence.

I have watched men order at dinner, ask for shitty wine and extra bread with a confidence I could never muster, and thought, What a treat that must be. But I also consider being female such a unique gift, such a sacred joy, in ways that run so deep I can’t articulate them.

It’s a special kind of privilege to be born into the body you wanted, to embrace the essence of your gender even as you recognize what you are up against. Even as you seek to redefine it.

I know that when I am dying, looking back, it will be women that I regret having argued with, women I sought to impress, to understand, was tortured by. Women I wish to see again, to see them smile and laugh and say, It was all as it should have been.

If I weren’t so wary of how consistently the word “sensitive” has been used to describe women’s writing and politely tuck it away from the world of Real Writing, I’d speak to Dunham’s extraordinary sensitivity — for it abounds throughout the book, but perhaps nowhere more so than in the chapter where she recalls her little sister Grace’s coming out:

Twenty-three and sponging mightily, I forked some noodles into my mouth as Grace described a terrible date with a “dorky” boy from an uptown school.

“He’s too tall,” she moaned. “And nice. And he was trying too hard to be witty. He put a napkin on his hand and said, ‘Look, I have a hand cape.’ ” She paused. “And he draws cartoons. And he has diabetes.”

“He sounds awesome!” I said. And then, before I considered it: “What are you, gay?”

“Actually, yes,” she said, with a laugh, maintaining the composure that has been her trademark since birth.

I began to sob. Not because I didn’t want her to be gay… No, I was crying because I was suddenly flooded with an understanding of how little I really knew: about her pains, her secrets, the fantasies that played in her head when she lay in bed at night. Her inner life.

In another chapter, Dunham exercises her remarkable gift for taking the memes of our era — in this case, the listicle — and using them, irreverently but somehow without the self-defeating burden of irony, to demonstrate that it is not the medium that defines the message but the substance and the substance need not be humorless to be serious. Under the heading 17 Things I Learned from My Father, she offers:

Death is coming for us all.

There are no bad thoughts, only bad actions.

“Men, watch out: the ladies are coming for your toys.”

Confidence lets you pull anything off, even Tevas with socks.

All children are amazing artists. It’s the grown-ups you have to worry about.

Unhappy at a party? Say you’re going to check on your car, then exit swiftly.

A sweet potato prepared in the microwave, then slathered with flaxseed oil, makes for an exceptional snack.

It’s never too late to learn.

“The Volvo is bad enough. I’m not putting a coat on the fucking dog.”

A rising tide lifts all boats.

That being said, it’s horrible when people you hate get things you want.

Hitting a creative wall? Take a break from work to watch a procedural. They always solve the case, and so will you.

Wear a suit to the DMV to speed things along a bit.

Do not make jokes about concealing drugs, weapons, or currency in front of police officers or TSA workers. There is nothing funny about being detained.

It’s all about tailoring.

Dunham dedicates an entire chapter to the first of these fatherly lessons — our complex relationship with mortality and the immutable human unease with our own impermanence:

Not That Kind of Girl is wonderful in its entirety, doubly so because it gleams an elegant sidewise beam of destruction at the various forms of lazy criticism Dunham has faced over the years, mostly for, well, being too damned good — particularly the kind of laziness that dismisses her intelligent introspection, with all the inevitable acknowledgement of imperfection it engenders, as mere self-abasement.

Most of us live our lives desperately trying to conceal the anguishing gap between our polished, aspirational, representational selves and our real, human, deeply flawed selves.

Dunham lives hers in that gap, welcomes the rest of the world into it with boundless openheartedness, and writes about it with the kind of profound self-awareness and self-compassion that invite us to inhabit our own gaps and maybe even embrace them a little bit more, anguish over them a little bit less. 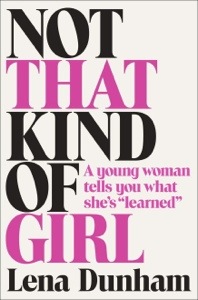 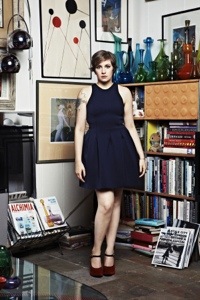 Patti (Lyons-Gooderham) Henderson is an innovative Director hosting a steady career in communications and entertainment. Patti's journey has included extensive research into her own genealogy; encouraging her curiosity and passion in finding story and motivation of character. She started in the world of journalism which took her to multiple countries in a variety of positions, eventually writing, assistant editing and field producing for MUCHMUSIC and MOVIETV. As a fiction Writer, her first feature script BENEATH THE SURFACE, won top prize from Praxis Screenwriters/I.A.T.S.E. script competition. With a thirst for learning the science of Film and TV making, she has worked for a multitude of productions in the capacity of Script Supervisor including RV, EIGHT BELOW, A SERIES OF UNFORTUNATE EVENTS, FRINGE, LOST IN SPACE, XFILES to name a few and as an Editor for shorts, TV series and Features. Her growth in the industry continues with the addition of working in VFX, on and off set. Patti has been a maverick in filmmaking. With the support of Sony Canada, National Film Board of Canada and BC Film, she spearheaded and directed UP THE WALL that was the first new technology (digital video-35mm) project to be shot in Canada in 1997, that included title on picture, VFX and finished in three formats. She has Directed and Co-Produced branding videos, sizzle reels for factual/lifestyle programs, corporates and fundraising videos, as well as 11 projects for the VFS Portfolio Shorts Program. Her work has played at national and international festivals, and aired on various North American Networks. For CBC, she Directed and Edited SALMON ENCHANTED EVENING which, after being selected from over 350 scripts, was produced and nominated for seven LEO FILM AWARDS winning best editor and best sound design. Patti is an Alumnae of WOMEN IN THE DIRECTOR’S CHAIR (WIDC), which chooses 8 women from across Canada to participate in the program at The Banff Centre each year. Her focus has, and always will be, storytelling. Her unique upbringing, combined with years of experience in the entertainment industry has helped to shape her into a vibrant Director with the ability, through passion, knowledge and experience, to elevate a wide range of scripts. Her latest work is writing a YA Novella series, with an eye on developing it into a TV series. She lives and works in the UK and Canada.
View all posts by creatornorthshoregirl →
This entry was posted in Be Yourself, Creative Process, Dare, Experiences, More Creator, Playful Spirit, Stay Extraordinary and tagged awesome, book, create, Dunham, feminist, inspiration, Lena, vulnerable, woman, writer. Bookmark the permalink.