The Allegory of the Cave

Posted on July 7, 2014 by creatornorthshoregirl

The Allegory of the Cave (also titled Analogy of the Cave, Plato’s Cave or Parable of the Cave) is presented by the Greek philosopher Plato in his work The Republic to compare “…the effect of education and the lack of it on our nature”.

Plato has Socrates describe a gathering of people who have lived chained to the wall of a cave all of their lives, facing a blank wall. The people watch shadows projected on the wall by things passing in front of a fire behind them, and begin to designate names to these shadows. The shadows are as close as the prisoners get to viewing reality. He then explains how the philosopher is like a prisoner who is freed from the cave and comes to understand that the shadows on the wall do not make up reality at all, as he can perceive the true form of reality rather than the mere shadows seen by the prisoners.

Socrates then supposes that one prisoner is freed, being suddenly compelled to stand, turn, walk and look towards the fire. The light would hurt his eyes, and cause great difficulty for him to see the object’s shadows he had seen before. In his pain, Socrates continues, the freed one would turn away and run back to what he can make out; the shadows of the carried objects. He is then told that what he has formerly seen has no substance, and that what he now sees (the carried objects) constitutes a greater reality. When he sees the world outside the cave he begins to question his previous beliefs.

The freed one is then dragged in pain and irritation up and out of the cave. Upon exiting the cave, this discomfort only intensifies as the radiant light of the sun overwhelms his eyes. The sunlight is representative of the new reality and knowledge the freed one is experiencing.

Slowly, his eyes adjust to the light of the sun. He is first able to see only shadows of things. Next he can see the reflections of things in water and later is able to see things themselves. He is then able to look at the stars and moon by night and finally he is able to look upon the sun.

He is then able to behold the sun and deduces that it is the “…source of the seasons and the years, and is the steward of all things in the visible place, and is in a certain way the cause of all those things he and his companions had been seeing.” 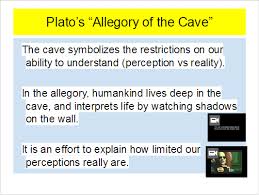 Patti (Lyons-Gooderham) Henderson is an innovative Director hosting a steady career in communications and entertainment. Patti's journey has included extensive research into her own genealogy; encouraging her curiosity and passion in finding story and motivation of character. She started in the world of journalism which took her to multiple countries in a variety of positions, eventually writing, assistant editing and field producing for MUCHMUSIC and MOVIETV. As a fiction Writer, her first feature script BENEATH THE SURFACE, won top prize from Praxis Screenwriters/I.A.T.S.E. script competition. With a thirst for learning the science of Film and TV making, she has worked for a multitude of productions in the capacity of Script Supervisor including RV, EIGHT BELOW, A SERIES OF UNFORTUNATE EVENTS, FRINGE, LOST IN SPACE, XFILES to name a few and as an Editor for shorts, TV series and Features. Her growth in the industry continues with the addition of working in VFX, on and off set. Patti has been a maverick in filmmaking. With the support of Sony Canada, National Film Board of Canada and BC Film, she spearheaded and directed UP THE WALL that was the first new technology (digital video-35mm) project to be shot in Canada in 1997, that included title on picture, VFX and finished in three formats. She has Directed and Co-Produced branding videos, sizzle reels for factual/lifestyle programs, corporates and fundraising videos, as well as 11 projects for the VFS Portfolio Shorts Program. Her work has played at national and international festivals, and aired on various North American Networks. For CBC, she Directed and Edited SALMON ENCHANTED EVENING which, after being selected from over 350 scripts, was produced and nominated for seven LEO FILM AWARDS winning best editor and best sound design. Patti is an Alumnae of WOMEN IN THE DIRECTOR’S CHAIR (WIDC), which chooses 8 women from across Canada to participate in the program at The Banff Centre each year. Her focus has, and always will be, storytelling. Her unique upbringing, combined with years of experience in the entertainment industry has helped to shape her into a vibrant Director with the ability, through passion, knowledge and experience, to elevate a wide range of scripts. Her latest work is writing a YA Novella series, with an eye on developing it into a TV series. She lives and works in the UK and Canada.
View all posts by creatornorthshoregirl →
This entry was posted in Be Yourself, Creative Process, Dare, Experiences, More Creator, Playful Spirit, Stay Extraordinary and tagged allegory, cave, create, good character study, Patti Henderson, plato, writer. Bookmark the permalink.