Alice and her looking glass

Posted on February 14, 2014 by creatornorthshoregirl

She wrote, directed, or produced more than 1,000 films. At age 23, she was one of the first filmmakers to make a narrative movie. She pioneered the technology of syncing sound to film. She created the first film with an all African-American cast. And she was the first woman to build and run a film studio.

Any idea who she is?

If not, you’re far from alone. A majority of people—even Hollywood directors, actors, and producers—have never heard of her.

Alice Guy-Blaché was the world’s first female director. She was one of the most innovative moviemakers of her time—doubly remarkable because she was a woman who succeeded in a solidly all-male world. But Guy-Blaché remains forgotten by many in the movie industry.

The technology was there, but she took it further by figuring out a way to connect with the audience through her storytelling.

She was active in France from 1896 to 1907 and in the United States from 1910 to 1922, and by utilizing a narrative technique, Guy-Blaché was able to accomplish something completely unique for the time. She understood that telling a narrative story in film was going to require following the perspective of a singular character, and it took a good 10 years for other filmmakers to figure out exactly what she did.”

In 1896, The Cabbage Fairy (La Fée aux choux) became Guy-Blaché’s first film. That first foray led to hundreds of short films for Gaumont Studios, where she was eventually made head of production. When Gaumont relocated her husband and cameraman Herbert Blaché to New York in 1907, she opened her own studio, Solax, which was located first in Flushing, Queens, and then in Fort Lee, New Jersey. Solax released two or three films every week—and Guy-Blaché directed most of them herself. Even Alfred Hitchcock was a fan. She was so ahead of her time, Green says, that she even made a movie called In The Year 2000, When Women Are in Charge.

Barbra Streisand is credited with calling Alice Guy-Blaché “a French film pioneer who invented the director’s job.” And indeed that is true, because in the early days of moviemaking, long before there was a film industry, everyone was just making it up as they went along, experimenting with the new technology. Because Guy-Blaché crafted stories, she shaped what it meant to be a director as the role is defined today.

In the late 1940s, when she noticed that the historical record of the film industry didn’t include her, she began speaking engagements—with Gaumont’s son Louis as her champion—and embarked on her memoirs. The unpublished manuscript was found by her daughter after her death, and Simone and Anthony Slide translated and published it.

Alice Guy-Blaché returned with her daughter Simone to Mahwah, New Jersey, in 1965 and died there in a nursing home on March 24, 1968.

The French government presented her with the Legion of Honor, its highest civilian honor, in 1953. The Fort Lee Film Commission has been working hard to have Alice Guy-Blaché instated in the New Jersey Hall of Fame as well as have a star for her on Hollywood’s Walk of Fame.

In 2012, Martin Scorsese accorded her the Director’s Guild of America Lifetime Achievement Award, saying: “It is the hope and intention of the DGA that by presenting this posthumous special directorial award for lifetime achievement, the Guild can both raise awareness of an exceptional director and bring greater recognition to the role of women in film history.” 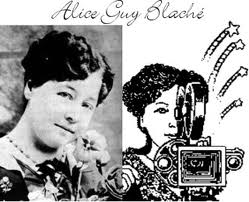 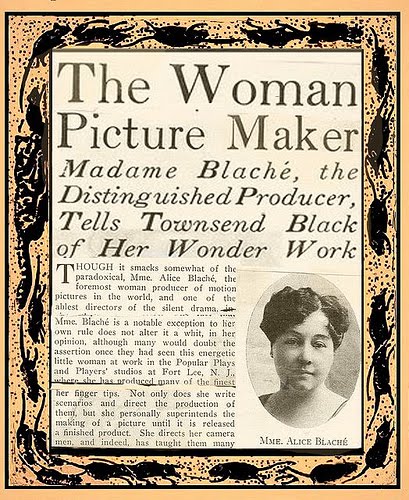 Patti (Lyons-Gooderham) Henderson is an innovative Director hosting a steady career in communications and entertainment. Patti's journey has included extensive research into her own genealogy; encouraging her curiosity and passion in finding story and motivation of character. She started in the world of journalism which took her to multiple countries in a variety of positions, eventually writing, assistant editing and field producing for MUCHMUSIC and MOVIETV. As a fiction Writer, her first feature script BENEATH THE SURFACE, won top prize from Praxis Screenwriters/I.A.T.S.E. script competition. With a thirst for learning the science of Film and TV making, she has worked for a multitude of productions in the capacity of Script Supervisor including RV, EIGHT BELOW, A SERIES OF UNFORTUNATE EVENTS, FRINGE, LOST IN SPACE, XFILES to name a few and as an Editor for shorts, TV series and Features. Her growth in the industry continues with the addition of working in VFX, on and off set. Patti has been a maverick in filmmaking. With the support of Sony Canada, National Film Board of Canada and BC Film, she spearheaded and directed UP THE WALL that was the first new technology (digital video-35mm) project to be shot in Canada in 1997, that included title on picture, VFX and finished in three formats. She has Directed and Co-Produced branding videos, sizzle reels for factual/lifestyle programs, corporates and fundraising videos, as well as 11 projects for the VFS Portfolio Shorts Program. Her work has played at national and international festivals, and aired on various North American Networks. For CBC, she Directed and Edited SALMON ENCHANTED EVENING which, after being selected from over 350 scripts, was produced and nominated for seven LEO FILM AWARDS winning best editor and best sound design. Patti is an Alumnae of WOMEN IN THE DIRECTOR’S CHAIR (WIDC), which chooses 8 women from across Canada to participate in the program at The Banff Centre each year. Her focus has, and always will be, storytelling. Her unique upbringing, combined with years of experience in the entertainment industry has helped to shape her into a vibrant Director with the ability, through passion, knowledge and experience, to elevate a wide range of scripts. Her latest work is writing a YA Novella series, with an eye on developing it into a TV series. She lives and works in the UK and Canada.
View all posts by creatornorthshoregirl →
This entry was posted in Be Yourself, Creative Process, Dare, Experiences, More Creator, Playful Spirit, Stay Extraordinary and tagged art, director, film, new technology, passion, producer, Story, warrior, woman. Bookmark the permalink.